Anxiety can arrive out of the blue and begin to overwhelm you at a moment’s notice. It can be really useful to have a quick-fix technique which can take your mind off the impending anxiety and help to defuse your problem state. This 30 Second Anxiety Relief technique does just that.

Many of my clients want something that they can use in the heat of the moment to help distract them from the immediate anxiety. This helpful during the early days of therapy whilst the client is letting the initial therapy work take hold…

Whilst some aspect of our life is getting our full attention ensuring that the advantage is taken/danger avoided, our attention simply isn’t focused anywhere else. This leaves us extremely vulnerable because most of our environment isn’t being attended to. We might miss an opportunity or worse, we might not see the danger sneaking up behind us with its shiny pointy teeth…

If you have the ability to cope with the pressures you face, then those pressures become positive stress. It all boils down to how much meaning the pressure has for you and how much control you exert over it. 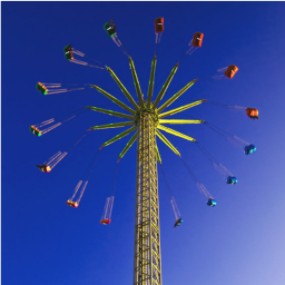 Positive stress is something which can motivate you to perform beyond your usual levels. Often we think of this as being a work-related issue where some people appear to thrive whilst others fall by the wayside. Positive stress extends to the world of sports too, think of any major sporting event and there are individuals and teams that have lifted themselves beyond anything they’ve done before. Where do you think World Records come from? It’s positive stress in action.

Perhaps it’s time for a challenge. It seems as though redundancy, a change of career and loved ones with serious illness aren’t challenging enough. Mind you, the latest research shows that a challenge response to stress is way healthier than traditional fight or flight. Maybe I’m on to something? So with plunge taken, leaping leapt and forward steps behind me I’ve decided to move on to Harley and his eponymous Street. Really. Harley Street. As New Year Resolutions go, this one definitely counts as a challenge…

On this National Stress Awareness Day, surprisingly few of us are lucky enough to have jobs we love.

For most, a good enough balance between work and home life makes it worthwhile and I count myself very lucky to be one of them. It wasn’t always this way. Having experienced more than my fair share of stress, I decided to do something about it. I retrained as Cognitive Hypnotherapist, specialising in helping clients who are experiencing high levels of Stress, Anxiety & Depression…: Click here to read more

It occurred to me a little while ago that many clients don’t know what to look for when they’re deciding who to approach about hypnotherapy. To help you decide, I’ve put a post together on my website which walks you through some things to consider.

What should you consider when looking for a hypnotherapist to work with? There are many therapies and many hypnotherapists to choose from. Unless you’ve been recommended to one, it can be daunting to have to decide who to choose.

Obviously there are more aspects to whether a particular hypnotherapist is right for you, but these 6 areas might help you make a more informed judgement about what you’re looking for. READ MORE…

It’s that time of the month again…

Last month I was helping people rediscover sleep and I figures you might be interested, especially as I wrote & recorded a bespoke 20 minute Hypno-Slumber mp3 for you to listen to at bedtime. It’s free, gratis and for nothing. Entirely complimentary in a sort of no need to pay for it kind of way rather than being rather than being flatteringly nice. You might find you don’t remember listening to it once you wake up?

Click on the link below to read more (or to get the link for the Hypno-Slumber mp3).

“…Estimates vary but it is thought that between a third and a half of British adults suffer bouts of insomnia. As the most common causes of insomnia are Anxiety and Stress, insomnia is a symptom that many of my clients are very familiar with.

The September edition of TBTalks looks at insomnia and how lack of sleep affects not only our ability to function but our health as well. Scroll down to find useful tips to help you manage insomnia and encourage restful sleep.

The good news is that we can recover really quickly from lost sleep. Once your insomnia has gone, you’ll feel refreshed with just a few good nights sleep…” {READ MORE}

How do I get the newsletter?

If you want to get this month’s issue straight into your inbox, click here: {Subscribe me to TBTalks monthly magazine}

In essence our unconscious mind uses our senses to scan everything in our environment like a multi-level radar system. Our brain, which by the way is the most complex system known to science according to that keyboard-playing Professor Cox, is superb at identifying patterns. It matches them to past experience and projects them into potential futures. In the blink of an eye it decides whether we are safe & sound or whether to sound the alarm to keep us safe.

It is simply stunning.

Sometimes the patterns it matches to are out of date, belonging to a you that is no longer here. Things that troubled you as a child are innocuous as an adult but we still feel the fear of speaking to strangers or talking to those we automatically see as authority figures. We respond to bosses as if they were teachers and we were children, either acquiescing quietly or becoming tongue-tied. Being called into the office is so like the walk to the headmaster’s room that we feel the same sense of trepidation and dread. (Or is that just me?)

Sometimes the pattern is more recent but the rawness of it resonates long after it ought to have past.

I got clobbered with one of these last week.

I’ve been making changes. And dealing with the inevitable anxiety that change can bring.

It became clear over the last latter half of 2014 that I needed to upgrade my website and become more active in promoting my Hypnotherapy business. Whilst client flow was good and is mostly by referral, (many thanks everyone, it’s about as good a compliment as I could wish for), there are still a whole host of people I could help with their anxiety who just didn’t know I was here.

So I made the decision to upgrade the website, get my Facebook business page aligned with the business (it’s just been a forum for this blog until a few weeks ago) and generally increase my online profile. I even decided that it was time to begin that newsletter I’ve been considering.

This is a post I published in April in the new home for my blog, as part of my therapy website. Why not take a look around when you visit and maybe Follow me there so you get regular updates. Many thanks, Tony

Algorithms; where would we be without them? Even though I know my mind is constantly firing off its equivalent complexes and striving to effect a cause, I still get caught out every now and then. There I was, having just vacuumed the hallway as you do pre-client, duly noting how there was no loss of suction in the way we’re primed to do by the no-so-young Mr. Dyson.

So far nothing out of the ordinary.

At exactly (and I mean exactly) the same time as I unplugged it to take it upstairs, the downstairs extractor fan stopped. Working on algorithmic autopilot, I found myself switching the socket back on to check that it hadn’t become the power supply for the extractor fan. Of course there is no connection but that doesn’t stop that still small voice of pattern hunting certainty from telling me that the extractor fan was now broken.

The really odd aspect of it all is that all the while, my Cognitive Hypnotherapist mind was telling me what was happening, even down to which algorithm was firing and which past experiences were colliding to form the triggers.

It made not one jot of difference.

Through trivial example, my Unconscious mind insisted on demonstrating how it tries to make sense of my universe. Needless to say, I defused the new pattern and laughed myself quietly free of a potential worry over miswired domestic circuitry.

It is from such misconstruances and misconnections that all manner of anxieties, fears and superstitions come into being. Coincidence isn’t something we’re wired to see. Cause and effect reasoning is much more persuasive. After all it gives us a far better narrative. Gods, demons and superstitions are born of such stories.

Mostly though, the connections are innocuous and leave us feeling just a little silly or out of sorts. Occasionally they are bold and brash and insidiously convince us that life is dangerous and filled with disasters waiting to happen. Herein lie the precursors of depression and anxieties; fears and phobias; destructive habits and negative self-talk.

So if you worry that something awful might happen or you’re frequently nervous, anxious or on edge, it might be interesting to unwind the patterns and triggers of the past and find yourself stepping out into a future happiness you didn’t think existed.

I’d be more than happy to be your hypnotherapeutic guide.